The faint border between the animal kingdom and us

In the last 3 decades, more than 30 novel human pathogens have been identified; 75% of them are zoonotic in nature, i.e. animal origin (1).

Now, we have a new kid on the block! Yes, you guessed it right.

Human’s intrusion into animal habitats is boosting the chances of new contagious diseases such as COVID-19.

Zoonotic pandemics are not new to us. Especially, quite a few infectious diseases have spread from great apes to humans.

But, do we care about their spread in the reverse direction, human-to-animal?

Thinking about the evolutionary resemblance, the non-human-primates (NHP) could act as reservoirs for several emerging human disease. At the same time, previous studies on great apes reflected that they are susceptible to infection with human respiratory viruses (2).

We are putting each other at risk!

This brings us to the research (3) on the possibility of sharing similar pathogens among humans and non-human-primates – a joint venture led by Dr Barbora Pafčo (Institute of Vertebrate Biology, CAS & CEITEC-VFU), Prof. David Modrý (CEITEC-VFU), and colleagues.

The researchers chose this tropical forest ecosystem in the Central African Republic for its rare features:

Dr. Pafčo said, “It is an ideal place to study parasite transmission, where all studied hosts share the same habitat. We did a strain-level identification of primate strongylid nematodes or hookworms among non-human primates (NHPs) and humans.”

“We detected a complex community of strongylids in the primates with two prevailing genera - Oesophagostomum and Necator,” revealed Pafčo.

Strongylids are parasitic nematodes, infecting a varied number of animals and humans.

Sharing of space, sharing of pathogens

“We detected both host-specific, but also common nematodes among humans and NHPs,” Pafčo mentioned, “especially, the genus Necator was detected in all studied hosts, including humans.” 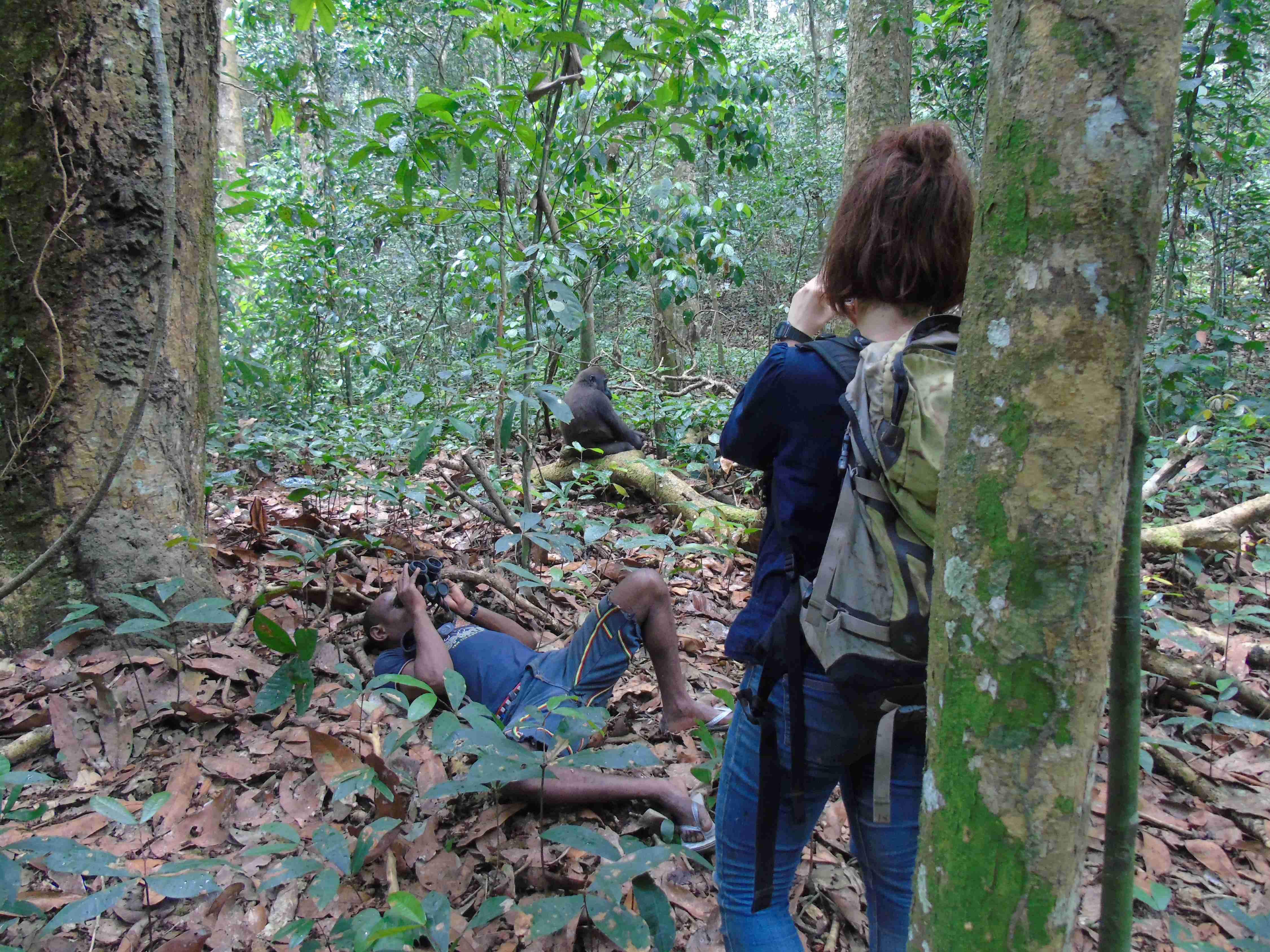 Barbora Pafčo in the DSPA: Observing (in 2016) the young gorilla - Sopo. She was just born (2010) when Barbora saw the gorilla group for the first time. A tracker is spotting the rest of the group on the trees (Image Courtesy: Barbora Pafčo)

“These parasites penetrate through the skin, so self-protection in the tropical rain forest is almost impossible. Surprisingly, Necator gorillae – an NHP-specific parasite, has been transmitted to humans. I also carried this worm!” stated Pafčo.

She also mentioned, “Contrariwise, Necator americanus (originally a human parasite) was found in NHPs, yet much it is more restricted to humans.”

Interestingly, the other studied genus Oesophagostomum – transmitted via the oral route, were often listed in humans from different localities, were not found in the DSPA BaAka population. Therefore, the scientists are thinking, skin-penetration is an essential strategy for parasite spillage in the studied hosts.

Dr. Pafčo who spent quite a long time in the DSPA during her studies said, “We also compared strongylid community in the hunter-gatherers experiencing direct contact with the NHPs, and their family-members settled in the villages.” The BaAka trackers’ strongylid community is closer to those of NHPs, compared to their village-based relatives.

The researchers ponder; this overlap is not due to a higher manifestation of NHP strongylid in trackers, but because of the higher abundance of human-specific strongylid communities of BaAka villagers. Therefore, it is far more “dangerous” to spend time in the infected villages than in the forest.

The research has opened a few avenues and enriched our knowledge in mammalian infection-biology.

Strongylid nematodes infect a broad spectrum of mammalian hosts. The developed identification methodology can be used worldwide for diagnostic and evaluation of these parasites.

Barbora Pafčo wants to thank the colleagues of CEITEC’s Genomics Core Facility, who helped her to develop the high throughput sequencing-based metabarcoding technique to detect the strongylids.

Pafčo expressed, “Strongylid nematodes are often labelled as broadly transmitted parasites, which we did not see in our study. We found only one genus shared between studied hosts, actively penetrating through the skin. It also means that the management of the national park is quite successful, as other orally transmitted parasites did not transmit between NHPs and humans.

“We sampled both habituated and unhabituated animals, and did not detect any trends of increased transmission risk from humans to the habituated groups.”

The steps ahead: better conservation of the wild fauna

Prof David Modrý stated, “Circulation of pathogens over the interface between animals and humans attracts more and more attention. Study on diversity of strongylid nematodes of lowland gorillas brought surprising information on the spillover of gorilla-originating hookworms into local human population (including researchers), showing how limited is our knowledge on our own parasites as well as on those of our closest relatives - the great apes. Barbora´s research and discoveries demonstrate the necessity (and advantages) of fusion of advanced DNA-based laboratory techniques with fieldwork in last patches of true wilderness.”

Dr Pafčo contemplates, “All wild animals have their own parasites/symbionts, which mostly do not cause any harm to them. A similar situation is evident in rural human populations. Nowadays, we know that these parasites have specific roles in the host organisms, and their elimination can cause downstream problems like a rise of autoimmune diseases.”

“However, even in wild animals, the health-condition can change with fluctuations of the external cues. Currently, we study mountain gorillas, which suffer from gastrointestinal strongylid nematodes. Using the experience we gained during the highlighted study, we are exploring the reasons behind the dramatic variance in the health of the mountain gorillas.”

“Both studies will help with conservation and management of wild endangered species,” added a hopeful Dr. Pafčo.