PEOPLE INTERVIEWS In conversation with Mary O’Connell: an Irish scientist in Brno

In conversation with Mary O’Connell: an Irish scientist in Brno

Prof. Mary O’Connell, the group leader of the research group RNA and Immunity at CEITEC, discusses her scientific voyage across borders and cultures, her support for researchers with families, and the bonds away from her favourite ADARs 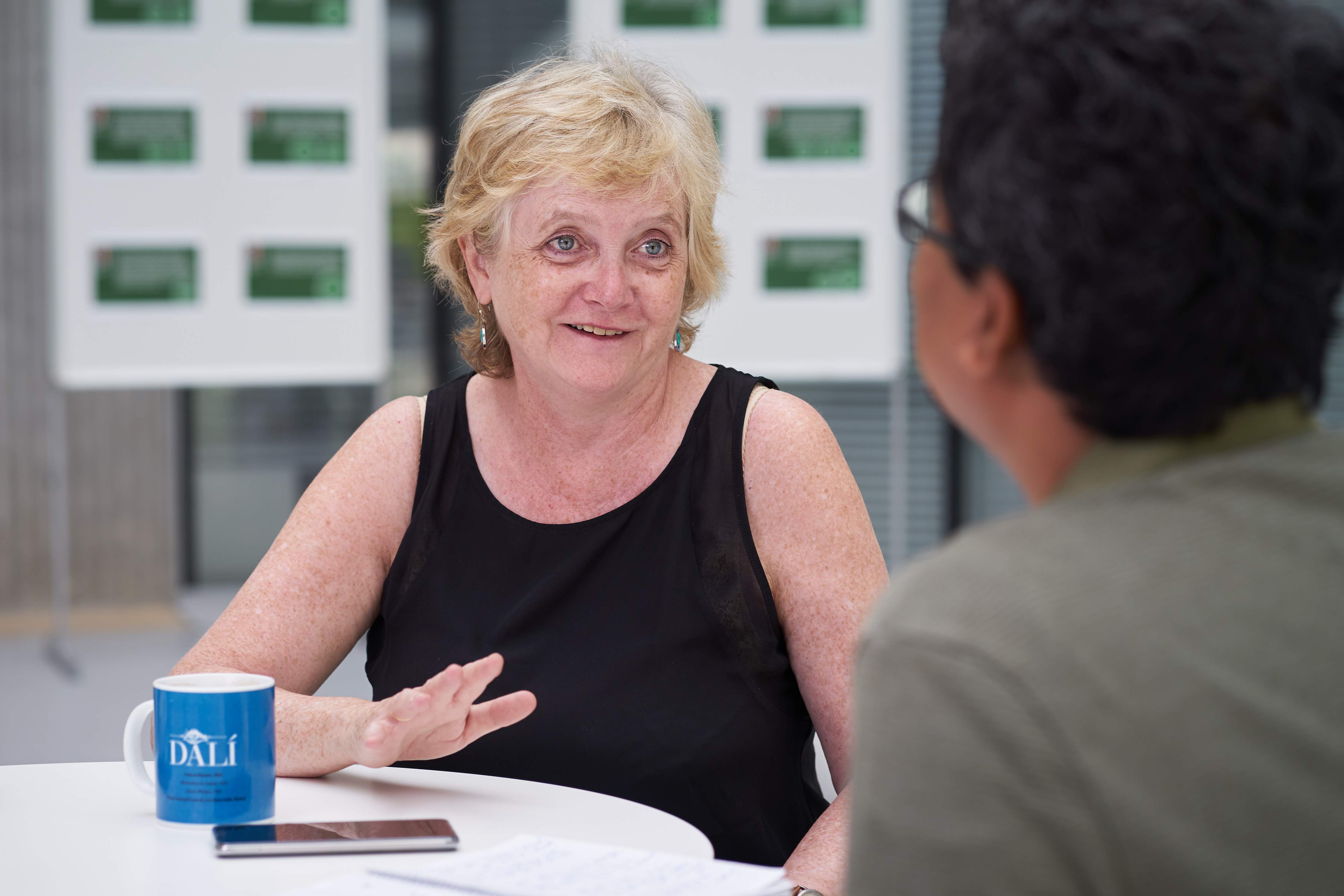 Let us begin from your initial steps as a scientist. Why did you choose science as a career?

Initially I was fascinated by medicine and wanted to pursue it, as I wanted to help people. I came from a small town in Ireland so I knew medical doctors but no scientists. Luckily for me I was accepted into science not medicine. When the opportunity came to switch to medicine I was already hooked to science and did not want to switch.  I realised by then that in medicine, you were taught facts that you need to be able to diagnose people but you have few opportunities to discover something new. But in science, you are like a detective, trying to solve puzzles and trying to second-guess and to figure out the next step. This is what I really enjoyed.

I believe science is not just a profession; it is calling, a vocation or a way of life.

Your goal is not just for yourself but to add to scientific knowledge that will benefit humanity. However, it is a very challenging career as no matter how successful or at what stage in your career you are at. Scientists have a saying, ‘you are only as good as your last publication.’ So you need always to be on your toes, looking for the next new discovery.

Did you have a particular role model in science?

I’m not sure if I had any particular role model, instead there always have been many people I hugely admired. When I started in science, there were very few women in leadership positions. It was obvious even to me as a young researcher the huge sacrifices these women had to make to be in these positions.

For a role model you want someone who makes it all look easy, not someone who obviously paid a heavy price to be where they are.

I worked with Walter Keller in Basel; he is probably the best role model in my scientific career. He was a fantastic scientist, a world leader but he always put his people first and the co-workers reciprocated in a similar way because of the respect they had for him. He showed by example that if you treated people well, that they performed much better.

Can you tell us a little about your experience to work in Nancy Hopkins’ lab? How did it shape you as a person and as a scientist?

Primarily, it changed me in the sense, that, I met my husband while I was a postdoctoral fellow in MIT.

I admire Nancy a lot. Unfortunately, when I joined her lab she went for a year-long sabbatical to the Nobel Laureate Christiane Nüsslein-Volhard’s lab in Germany. This was a time when communication between continents was not easy. I went to her lab because of my interest in retroviruses, but she switched from retroviruses to Zebrafish while I was there.

To be honest, I did not really like the atmosphere of science at MIT; it was too competitive, it was and still is a scientific hothouse. Nevertheless, working with Nancy was an honour as she is an amazing woman.  She had a huge uphill battle being accepted as a woman scientist. At this period in the early 90’s, there were 60 professors in the Faculty of Biology at MIT and among them, 3 were women. Despite this, they were discriminated in terms of support, pay, laboratory space etc!  When Nancy realized this, she took on the establishment both at MIT and Harvard and guess what, she won! She is truly an inspirational lady who is fearless. I think what I learned from her is to stand up for what you believe in.

How did you manage the work-life-balance?

However, I think we should revise the phrase ‘work-life balance’. Because you cannot balance life and work! At a certain time of your life, career has to come first, some other moments it is family. The word ‘balance’ somehow gives us the image that you can control it! Actually, it is impossible.

I have always tried to sacredly guard certain time with my family such as in the evenings and weekends unless a critical deadline cropped up!

I may not be the best mother in the world but I am very close to my two sons, one is doing science and the other is doing medicine. So my husband and I managed to pass on our love of science to them!

How did you move into RNA biology?

That is rather a sad story. When I was pursuing my Ph.D. at Albert Einstein College of Medicine in New York, some of my colleagues died of AIDS, during the early days of the AIDS crisis in NY. This experience changed my life; many of my friends and I decided to study retroviruses. One of the best labs in the country that time working on murine retroviruses was Nancy Hopkins’ lab at MIT. That was the beginning!

When my husband and I decided to move back to Europe, we decided to move to Switzerland but at that time there were no groups there studying retroviruses there. The closest project I found was in Walter Keller’s lab in the Biozentrum in Basel. There I began the RNA project that I am still working on 30 years later.

The project was based on a few papers that had just been published from other groups. It was concerning a novel RNA helicase that was connected to measles infection. This checked all the boxes for me: viruses, RNA, and disease.

It turned out that the protein was not a helicase but an enzyme that changes the encoded nucleic acid in the RNA; converting adenosine to inosine.

In the beginning, it was hard to convince other researchers of the importance of this enzyme so it was hard to get funding. Many times, I was invited to give a talk but found myself to be the last speaker of the meeting. Now the situation has flipped, ADAR has become a very important topic in cancer-biology; it moved from being on the edge to the centre of current scientific interest. This is why basic research is critical, as you never can predict where it will lead you.

Can you pick a scientific topic, away from your research field, which you think should receive more attention?

It is climate change. We need to look at the bigger picture; climate change has many other causative factors, still unknown. We should examine other angles not just carbon emission which is of course very important.

We should perhaps study the emissions from airplanes, which are constantly leaving a trail of vapor in the upper atmosphere where it is not naturally present, and determine if there are consequences to this.

Besides your scientific interest, what are your leisure pursuits?

My life revolves around my family and my work and of course my pets (2 cats and a dog). I do not have much free time after that. The other things I cherish are walking, gardening, reading, and travelling!

What changes are needed, if any, in the scientific system especially for women in science?

The culture has to change! It is gradually changing but not fast enough. Thirty years ago, Nancy Hopkins was fighting Harvard and MIT for the equal treatment of women researchers and faculty. Attitudes in some countries have improved slightly, but to be honest, not in all.

But it is not women in science, but we need to start treating mothers in science better. The issues needing immediate attention are equal pay and status for women and consideration if they have children.

One of the most important issues is equal pay for the same work; salaries for women are much lower. If a woman is the main breadwinner of the family then she cannot afford a job in academia when her salary is 20% lower than her male colleagues.

On the other hand, to educate women and not to give them a fair opportunity is ridiculous, it is morally wrong and economically a huge waste of both money and talent.

In the Czech Republic, the way childcare is organized, makes it very difficult for women to continue in academia unless they have substantial backing from their family and husband. The salaries are low, and as it is designed for them to take 3 years of maternity leave, their scientific career is over if they take that time off.

Women should not have to choose between a career in science or children, most men are not asked to make this decision. As more than half of the Ph.D. students are women, why is there not a change in government policies and give women the opportunity to continue their careers? It would make economic sense!

What would be your advice for the young scientists?

Believe in yourself! Have self-confidence and go for it! You have only one life!

My younger son who plays a lot of sports gave me a great motto “Failure is not falling down but refusing to get up again!’

My advice especially for the future women scientists; if you love science, let nothing stand in your way. Remember science is not a 100 meter dash but a marathon. It will have its ups and downs, so be prepared for the long slog.